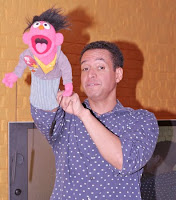 Puppeteer wants kids to try their hands at creativity

Children's entertainment of today is so high-tech that the old-fashioned charm of hand puppetry can, unfortunately, get buried, says a prominent puppeteer who is doing a workshop Saturday at the August Wilson Center, Downtown.

"Puppets are sort of like the old-school version of 3-D animations; it's the animation you can touch," says Noel MacNeal, of Brooklyn, N.Y. He is a puppeteer and production consultant for "Sesame Street," and the author of "10-Minute Puppets."

MacNeal -- who played Bear in the Disney TV series "Bear in the Big Blue House" -- will be coming to the August Wilson Center for a Family Puppetry Workshop, based on his book released last month. He plans to demonstrate to kids and adults how to make the simplest puppets in as little as 10 minutes, using everyday materials like paper bags, napkins, socks -- even your hands.

"I made this book as friendly and simple as possible," says MacNeal, who lives with his wife, Susan, and their son, Matthew, who appears on the cover of "10-Minute Puppets."

"It was my way of reintroducing the magic of puppets to this generation -- not only to kids, but also to parents," MacNeal says.

Participants, he says, will enjoy the empowerment of learning how to make puppets: "Look at what you can do with what you just made," MacNeal says.

After the workshop, MacNeal will do a book-signing, and visitors can enjoy a meet and greet with Lionel from "Between the Lions."

He says he is excited to perform at the August Wilson Center, which represents part of his racial heritage. MacNeal's mother is half African-American and half Native American; and his father is half African-American, half Italian. MacNeal, who was born and raised in Harlem, N.Y., says that the Family Puppetry Workshop should draw members of any ethnic background to the center.

Joe Wos -- executive director of the ToonSeum, which is partnering to present the workshop -- says puppetry is an instant form of animation. Skills of puppetry even apply to modern, high-tech entertainment like video games: the player manipulates an onscreen characters' movements. Still, classic puppetry with real-life puppets is priceless, Wos says.

"There's a magic to it; it's almost unexplainable," he says. "It can be charming in its simplicity, too -- that magic of ... a simple object and watching an artist bring life to it."

MacNeal, Wos says, is "an extremely talented performer -- one of the best."

Can Daddy Come, Too?

This morning, my son and I walked to school with our neighbor and his daughter. I told him that we got the invite to his daughter's birthday party and replied "yes." He then asked if I had a chance to check his status on Facebook. "No," I said, "but I will now."

Here's what he said:

"I think it's a little bit sexist when people e-mail kiddie birthday party invites just to the mom and not to the dad (when they have both e-mails or can find them pretty easily). If dads can't be trusted to get things onto the calendar, do kids with two dads not get invited anywhere?"

I smiled because he did tell me that it was a reaction to the fact that some did respond one way or the other..... to his wife's email.

The FB responses were fun, too (15 as of this writing):

"No real pattern - it's either random or dependent on which one of us has a closer connection to the other parent. Totally bizarre."

".. whichever parent SEEMS like he/she is in charge of that sort of thing. Sometimes I just feel bad bothering both parents; seems unnecessary."

"Ask my husband how he feels about the Maclaren stroller ad that says something like 'Made with Mom and Baby's Needs in Mind.' Or about the lack of changing tables in men's restrooms. Or more recently, the lack of family bathrooms at Disneyland, where our daughter refused to enter the men's room with him."

"I email the dad when I know the dad welcomes the email, or, when the mom's a bitch. But you're right it's sexist and annoying." (my favorite)

But, come on, there really is a stigma here. The majority of ads, both on TV, in print, and online, are geared directly at mothers. And it's because mothers do a lot, starting with the whole carrying the child for nine months scenario (remember "Childbirth trumps everything"). A lot is expected from them, from physical to emotional nurturing, that society and often, family place on them. But in many cases, more and more each day, this is changing. It's the having to mention that it's changing that's a little annoying.

A few years ago, a cable channel, let its female on-air host go. They were looking for a new female on-air host but for the interim asked if I would host it. It was a night time show to help kids get through their bedtime routines while showing short shows from their programming. Since they knew I had hosted a TV show, they thought I'd be OK doing this. Granted my previous hosting duty was a big old talking, cha-cha-cha-ing bear who owned his own home. But I knew who to interact with the camera keeping in mind that it's not a camera, it's a kid; a kid who has never seen me before. It's a trick I used on Bear to always keep it fresh in my mind. Plus it's true.

But one concern was raised and I was asked about it. "Do you think people will accept a man being that nurturing to a child. Especially at night?" I was floored, completely gob-smacked (as the saying in England goes). Did you just ask me this? As I my face did not register any of this, I replied, "Yes. Starting with Mister Rodgers, Captain Kangaroo, both hosts of Blues Clues, people see how nurturing and natural it is for males to interact with children. And being a new dad myself, I'm already being nurturing at bedtime. Every night."

The dad who posted the status is awesome. He is always hands on in every way possible.In fact, his wife has been traveling more and more for business so he's been, at times, a single parent. And I get it. I and so many more guys are doing whatever we can, whenever we can, even staying home full time to do it. Living in Park Slope (Kid Central and apparently where the most blogs in the entire U.S.A. come from... glad I could help that stat), I see more and more guys hauling babes in Bjorns and pushing tots in strollers. They go to the play spaces with them, run errands with them, read to them at the local Barnes & Noble, and of course, feeding and... the result of feeding. When was the last time you saw any of THIS in an ad? Name one ad that just shows a dad doing what is always expected of a mom.

At our son's Thanksgiving class party, he volunteered to bring in turkey. There was no way I was going to cook a whole extra turkey for a kindergarten class. Solution? I got turkey deli slices and that morning I rolled them up, cut them in half, and my son stuck tooth-picks in them. they were a hit, I am proud to say, and all the moms complimented the ingenuity involved... to my wife. "No," she said, "my husband
Posted by Noel at 5:49 AM No comments: