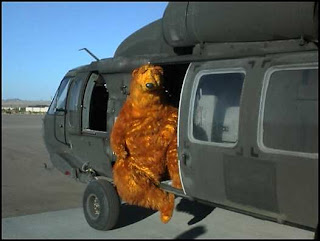 Today is Memorial Day. Folks get the day off from work and school. There's going to be barbeques, pool parties, and games on the beaches and lakes across our country. And all this fun is due to the somber side of this day.

Today we should all take a moment to acknowledge and remember those who have and are currently serving our armed forces and who voluntarily put their lives at risk to for the sake of our freedom.

But we should also take another moment to a moment to acknowledge and remember those who have and are currently serving our armed forces with their unwavering support and love. I'm talking about all the families.

In 2005, Bear in the Big Blue House got a "spin-off" series called "Breakfast With Bear." Bear went to the actual homes of real children who showed him how they would start their day. We did them in NY and LA and visited homes in apartments, the suburbs, even the Big Apple Circus. But the one I remember the most was the visit to Fort Irwin.

Ft. Irwin is situated in the middle of the Mojave Desert and is the largest training facility in the U.S. It is roughly the size of Rhode Island and even has it's own "village" for the military to practice in. It also has it's own town for the families of the enlisted to live. It's got a supermarket, movie theatre, even a hotel.

"Jonathon" was the boy we got to visit, whose dad was stationed in Iraq. In fact, while we were shooting the breakfast scene, he called home and his wife said she couldn't talk now because "Bear is in the kitchen" and hung up. "Call the man back!" Bear insisted, "It's OK! We'll wait!"

While we were at Ft Irwin, I did "meet n' greets" for the families to get photo ops and chat with Bear. Just before we left, we were asked if Bear could go "across town" and visit that neighborhood, in particular one family who's husband/father had been killed two weeks prior. "Absolutely," I said, "but don't tell me which family it is." Bear rode in the back of a hummer over (so cool by the way) and met everyone there and after we left I asked which ones they were.

I have always wanted to go back with Bear, even tried organizing a visit with other Disney characters but to no avail. But this past week, I found out that I can have copies of my puppet making book shipped there for free and with my upcoming book tour in the fall that includes California, asked if I could go back and visit. The people there are wonderful, hard working, loving, and just like any other family trying to do the best they can each day...... with of course that one exception: the loved one(s) are away.

So here is to all the brave souls who serve the military and our nation abroad ––– and right here at home.
Posted by Noel at 9:02 AM 1 comment:

Today is when many people will take a moment to remember Jim. Those who worked with him, those who met him, those who wished they met him, and mostly those whose lives were effected by his talent in one way or another. And being Jim, it will be positive, even life changing. "Genius," "inspirational," "the 'Walt Disney' of puppetry," and more will describe him.

I knew Jim. I worked with Jim. To me, he was all those descriptions I mentioned. And he did have a life changing effect on me; he (and the rest of the Muppets) convinced me that if he could make a living, a life long career, as a puppeteer, so could I. And I have.

But the other title most people don't think of when thinking of Jim is the other "career" I have also. Jim was a dad.


It was the late 80's (I can't remember which year). We were holding a puppet, with what’s known as “practical hands.” This means the principal performer puts his hand, usually the right, up through the body into the head, to open and close the mouth in time to the words spoken. The other hand goes into a sleeve made of the same material as what the puppet is wearing and into the puppet’s left hand. In this case, the puppet in question was Ernie and I was “right handing” for him — Jim Henson. And in the middle of rehearsal, the Sesame Street lighting crew needed to make a quick adjustment, so, rather than take Ernie off, we just sat down on two wooden boxes near the set. And I remember thinking, “I’m sitting next to Jim Henson. Jim Henson! This man is the 'Walt Disney of puppetry,' even better than Disney. He’s Kermit the Frog. He’s Ernie. I’m attached to Ernie! I should say something. Say something! You’ve got a chance most puppeteers would give their right arm for — and how stupid would that be — couldn’t “right hand” without your right arm . . . . Jeez, Noel! Focus! FOCUS! Think of SOMETHING to SAY!!!"

And then in that multi-second of panic, I remembered what my mom would always do to get someone to talk; if they're a parent, ask about their kids. "People will always talk about their kids." So that's when I turned to Jim Henson and asked, "So... how are the kids?"

And the man looked at me and said, "Oh. they're great," and proceeded to tell me what each one was up to at the time; their projects their interests, where they were. And I could feel the pride this man had in sharing the news of his children with someone else. Being a dad now, I can now see what was in his eyes; him watching them at growing-up and becoming their own persons.

I had other opportunities to chat Jim up. But I'll always remember that first time I really got to talk to him.And today, I feel proud to be a puppeteer and a dad. 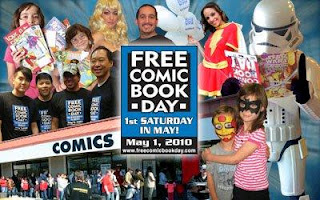 It's May! It's the first of May! Which means what? It's FREE COMIC BOOK DAY!

Yes, you read that right.

On 1 May, comic book stores across the country (and around the world) give away FREE comics. Check your local stores for their participation and rules for today. Then get there early!

My five year old son is so interested in reading. In fact, there are several words he can not only read but also write. So a comic book offers a great opportunity for more reading. And there are so many little kid friendly comics out there, now. Just checkout:

For more info on FREE Comic Book Day, plus to watch a video from comic book fan Milo Ventimiglia of TV's HEROES, just go to:

And in the words of the immortal Stan Lee: