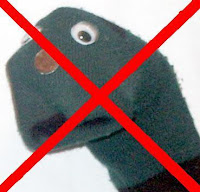 There is a dearth of puppetry on TV right now. Let's review:

Thanks to PBS Kids and Sprout, two of the 24 hr kid networks now available, the classic - nay - now the landmark, standard bearer of children' television, Sesame Street, can be seen every day, almost at any given hour. On Disney XD, the 24 hr tween channel from the House-of-Mouse, there is the prime time series, Crash & Bernstein, (starring my friend and colleague in puppetdom, Tim Lagasse) about a young boy's doll come to life and thus, hilarity ensues. http://www.youtube.com/watch?v=6jRtQ25MjcI

And what do these two series have in common. Of course....

Both use this art form to entertain their viewers, slipping in a lesson or two while doing it (well the Street does, anyway), all the while using tricks and techniques first perfected by the Muppets and that guy who started it all, Jim Henson. Jim once said that his characters were "made for television." Meaning, that the TV, itself, is the traditional proscenium his puppets used. Thus no need to hide behind anything; the camera just cuts the puppet off at the waist (and hiding the naughty bits, aka puppeteers underneath). Crash is the freshman on the air, with it's first season under its belt, while Sesame just wrapped it's 429th season on the air. It feels that way. I mean, at this point, when wasn't Sesame on TV?

These two shows have one other thing in common.

They are the only two shows featuring puppets, nationally seen on networks, in the United States.

I think there should be more puppets on TV. I grew up with puppets on my TV, on a daily basis. Sesame, of course. But also, Shari Lewis and Lambchop (and how many shows did they do duirng the course of Shari's career?); Kula, Fran & Ollie with the incredible Burr Tilstrom doing all the characters (save Fran, the token human to be the puppets' friend, confidante and assistant); Mister Rodgers' Neighborhood and the  the cast of the Neighborhood of Make-Believe, brought to life by Fred Rodgers', himself); and Saturday mornings had many a Sid & Marty Kroft show.

When I began my career in puppetry thrived in TV and commercials and even movies. Remember Alf? Spitting Image? D.C. Follies? All those Chuckie movies? Gremlins? Gremilns 2? I could keep listing. Puppets were naturally used. When Nickelodeon created its' first kid show it was Eurreka's Castle (paid from the profits the network got from its game show Double Dare. Remember that?). And I was fortunate enough to work on it. This new puppet show Not a cartoon. A puppet show. Nick then had other shows with puppet sin the 90's; Allegra's Window and Gullah Gullah Island. Shows with humans and puppets. Nick loved puppets right through Jack's Big Music Show and up to Oobi.

Disney too had its original puppet driven program in the 90s, Welcome to Pooh Corner (ok, puppets is a stretch with this show, but it comes close). But then in 1997, Disney announced that it would create a new daytime block called "Playhouse Disney," and the "flagpole" (network-eese for the central, main draw) would be a show called Bear in the Big Blue House. An all puppet show, with puppets created by The Jim Henson Company (making Bear et al un-official "muppets"). In 2005, the channel produced the spin-off series, Breakfast With Bear, with the walking-talking Bear out in our world visiting kids in their actual homes. (And let me tell you; human doors aren't designed for the girth of a bear.)

Now that's all changed. Yes, due in part to the advancement in computer-generated technology to create 3D characters. And I have nothing against good shows that use this medium. Sid the Science Kid, on PBS, mixes puppet techniques and computer animation to create Sid and his world. This new form brought to by The Jim Henson Company. In Jim's words, again, these characters "were made for television." It's a good show but, is it's success due to Sid & company not looking like "puppets?" http://www.youtube.com/watch?v=m6Qdvvb1UTs

Networks don't want puppets. Period. It's true. In fact, one children's network actually has it written in its letter to those pitching show ideas to them. "No puppets, please." I've had execs at two different pitch meetings at a kids network tell me that "the problem with puppets is that they screwer too young," "puppets tend to be for young children." But your networks are for YOUNG CHILDREN! And another network actually let me know that if I could come up with a cheap 3D show where the characters had to collect things that kids at home wanted to collect (wink, wink: buy), that would work. Networks have a bottom line and once again I am reminded: there is a reason why this is called "show business."

Well that doesn't work for me. And I intend to do something about it.